Helpline : 8695172425
Difference of human spine from those of other mammals 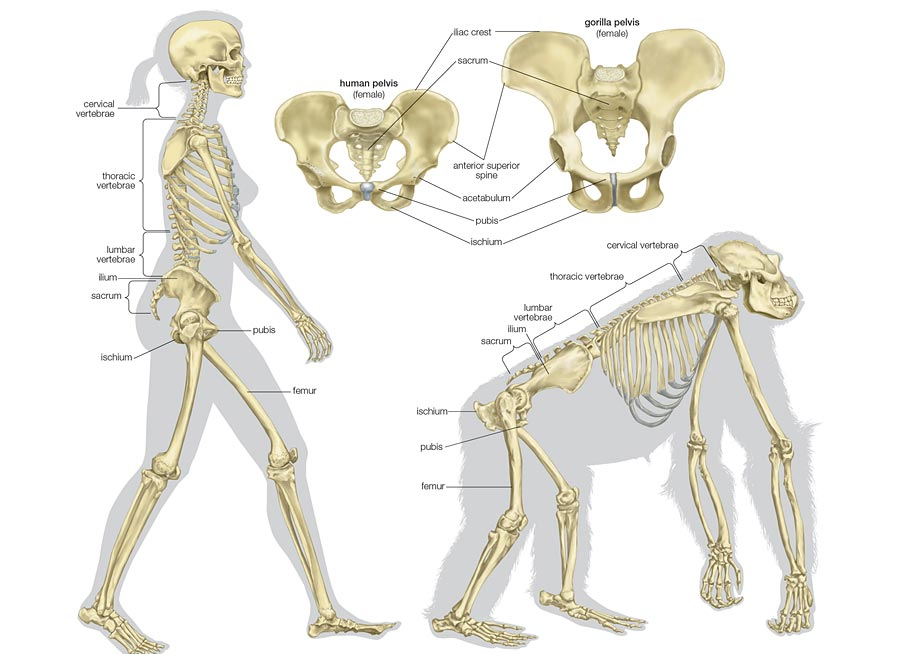 Difference of human spine from those of other mammals

While evolution has created diversity of life on our planet, it has also maintained consistency in distantly related organisms which is illustrated by numbers of neck and back vertebrae in mammals, except manatees, two and three toed sloths.
Besides being warm-blooded, mammals are also unique from the rest of the animal kingdom, with respect to the spine structure where human spine different from other mammals. Backbones of mammals have sections namely neck, thorax and back, which take different shapes to adapt to activities of life such as running, flying, digging and climbing.

Early changes in the mammal’s spinal column marked first step in evolution which gradually led to spectrum of mammal species found today. The body plan of mammals which is built on mobile back is preserved immaterial of running speed. Reportedly, the locomotion behaviour namely suspending on trees is associated with numbers of vertebrae in mammals. The number of neck or cervical vertebrae and back vertebrae which comprises thoracic and lumbar regions of mammals is studied.

Another aspect where human spine different from other mammals is noted is mammals have developed compartmentalized spinal regions which take different shapes and functions without affecting other spinal regions, in order to adapt to each of their lifestyle. While developing spinal regions led to evolving backbones with different functions, evolution of demanding lifestyle expects more from the backbone. While probing a simple structure that evolves to a complex one that can do different things, a debate emerges whether to attribute such capacity to limitations of development or to natural selection related to the behaviour of the animal.

Irrelevant of the neck length, giraffes, mice, whales and platypus have seven cervical vertebrae. Most of the mammals have 19 to 20 thoracic and lumbar vertebrae. Totally CTL (cervical, thoracic and lumbar) vertebrae are 26 or 27 for mammals. Rodents, rabbits, deer, kangaroos, koalas, cows and monkeys have 26 CTL while dogs, cats, bears, weasel, otters have 27 CTL. Humans with 24 CTL are exceptional. Variations in numbers are within species or across species which are separated by 160 million years of evolution. A possibility of accounting higher speed running to controlled CTL and low speed animals to varying CTL is based on limited sample of mammal diversity.

Researchers reportedly studied over 300 species of mammal CTL with focus on traits such as speed, habitat, locomotion, spine mobility, posture and limb use. Changes in vertebrae depend upon Hox genes, which organize animal bodies in head tail axis. Changes in the Hox gene expression create vertebrae which impinge mobility of the spine. Mammals like apes, owing to antipronograde behaviour, where they are not parallel to the ground while moving, depart from this body plan and vary in their numbers of CTL.

When humans evolved and began to stand and run, the spine changed accordingly. The length of arms, thickness of bones and fingers changed consequently. Being upright gave more room for vocal chords and tongue in the spinal cord, making way for speech. When man shifted his dwelling from trees to plains, spine evolved accordingly. Human pelvis became narrower to enable upright walking. This upright mobility also enhanced ability to make and use tools and capacity to speak were obtained in the cost of letting go strength of chimpanzees which is 1.35 times stronger than humans.

The changes in the limb need changes in the shoulder and the relevant vertebrae which resulted in the unique region of spine behind the neck. Since shoulder muscles were freed, mammals could breathe better and posses a higher metabolic rate.
The evolutions that followed enabled individual vertebrae to change without affecting the function of the entire spine. Lumbar region, which interacts with pelvis and limbs, is the last to emerge.