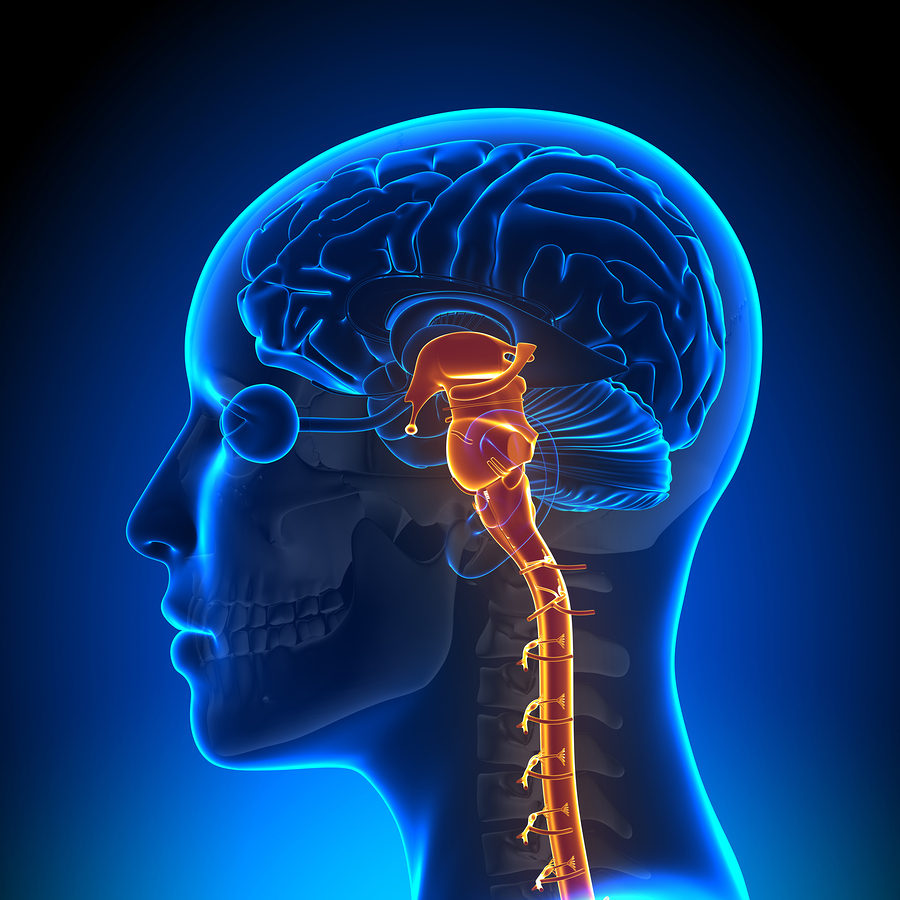 The brain stem which is located in the base of brain amidst deep cerebral hemispheres and cervical spinal cord, controls the entire functioning of the human body including involuntary actions like heartbeat, blood pressure and breathing. These functions are jointly conducted by three components of brain stem namely midbrain, pons and medulla oblongata. The brain stem connects the brain and the spine. Below we will see the functions, diseases, symptoms and treatments.

The brain along with the spinal cord forms the Central Nervous System (CNS) which comprises all actions including senses, emotions, thoughts and memories. The brain stem is one of the three parts of the brain, other two being cerebrum and cerebellum. Though these parts work in harmony, each have their unique responsibilities. The brain stem which houses a bundle of nerve tissues that connects cerebrum and cerebellum to the spinal cord, is little more than 3 inch long and tube shaped.

Brain stem is found in posterior part of the brain and is a part of the vertebra adjoining and continuous with the spinal cord. It has the cranial nerves which handle motor and sensory intervention between face and the neck. Brain stem is packed with maximum critical axon tracts and nuclei unlike elsewhere in the central nervous system.

Dr Karunakaran S Spine Center offers back pain treatment in Chennai which offers a wide range of orthopaedic solutions, equipped with state of art equipments and team of skilled faculty.

Parts of the brain stem

Pons contains the nuclei which relay signals associated with sleep, bladder control, equilibrium, taste, eye movement and facial expressions along with various other functions, from the forebrain to the cerebellum.

Pons carries signals from cerebrum to medulla and cerebellum and contains the tracts that carry sensory signals to thalamus.

The midbrain is associated with functions such as vision, hearing, motor control, sleep cycles and temperature regulation.

Medulla transmits signals between spinal cord and higher parts of the brain thus enabling automatic activities such as heartbeat and respiration. It also controls reflexes like swallowing, coughing and sneezing.

The ascending pathways in the brain stem are sensory pathways like spinothalamic tracts for pain and temperature, dorsal column to communicate touch, vibration, two point discrimination, proprioception from skin and joints, fasciculus gracilis, cuneatus for touch and pressure sensation.

The descending path carries motor signals from brain to lower motor neurons which in turn innervate muscles to enable movement.

Leukoencephalopathy denotes damage of white matter of the brain, which forms the myelin sheath which in turn covers the nerve fibers. This myelin sheath is inevitable for transmitting signals between nerve cells. Lactate is a metabolite that supplies energy to the nerve cells.

Patients affected with elevated lactate show symptoms like spasticity, weakness and progressive cerebellar ataxia. Also known as LBSL, it is found to have a spectrum of disease within its fold.

Infants with LBSL may pass away in initial couple of years or might show symptoms in childhood or adulthood. They might resort to wheel chairs or have walking problems. Affected individuals might also could not sense the position of their arms and legs.

LBSL is caused due to an abnormal variant of DARS2 gene. When mutation of gene occurs, The proteins become faulty, insufficient, absent or excess in amount. Depending upon the function of the protein, among many organs of the body, the brain stem may also be possibly damaged.

Degeneration of brain parenchyma or functional tissue of the brain originates and affects brain stem and damages specific regions of the nervous system.
Brain stem strokes come with symptoms like vertigo and dizziness. If it is caused by clot, faster blood flow might give chances of recovery. Brain stroke might happen due to high blood pressure, diabetes, heart diseases and smoking. Since it does not affect language ability, participation in rehabilitation stays unaffected.

When symptoms are found, patients should be rushed to spinal cord specialist in Chennai, who could recommend further action of recovery.

The spine surgeon in Chennai is also prime surgeon in minimally invasive surgery and has various prestigious accolades to his credit.

With the advent of science, brain stem damage might appear irreversible but is not as hopeless as estimated.