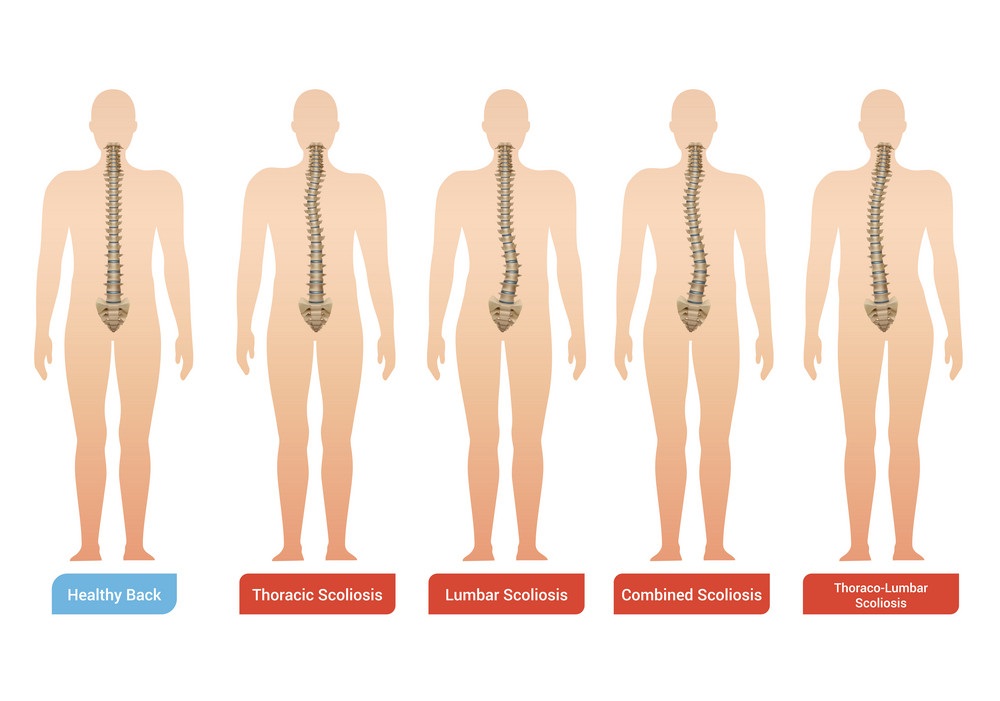 Causes and treatment for spine curves

The S shaped spine which extends from neck to tail bone appears as a straight line from rear, and comprises of normal curves called lordosis and kyphosis, whose disorders are addressed by the same name. The curves in the spine absorb stress that occurs due to body movement and gravity.

Spinal cord specialist in Chennai refers to the abnormality in the spine curves as lordosis, kyphosis and scoliosis. Due to these abnormalities, the spinal curves are misaligned or exaggerated.

Lordosis is known as swayback and curved significantly inward in the lower back. It may also occur in the neck region. The swayback makes the buttocks more prominent and gives an exaggerated look which makes movement difficult and painful. Lordosis may also be a result of spondylolisthesis, osteoporosis and obesity.

Lordosis is also observed in pregnant women as their belly and buttocks protrude. In reality, it is spine adjusting to realign center of gravity. The back pain which is experienced due to this condition is due to altered blood flow in the body and pain diminishes after birth.

Kyphosis refers to rounded upper back which is curved more than 50 degrees in the upper back. This excessive deformity results in hunch back or hump back and affects chest, low back and neck. Spine surgeon in Chennai observe that patients who have a pitched forward appearance may be owing it to poor posture or structural kyphosis.

Each of these curve types are caused by one of the spectrum of reasons which are as follows.

Lordosis is caused by Achondroplasia, Spondylolisthesis, Osteoporosis, obesity and Discitis to name a few. Achondroplasia is a disorder in which bones do not grow normally which results in short stature and causes dwarfism.

Spondylolisthesis occurs when a vertebra in the lower back slips forward and in osteoporosis the vertebra becomes fragile and breaks easily also known as compression fractures.

Kyphosis can be caused due to abnormal vertebra development in the uterus region and is known as congenital kyphosis. Poor posture causes postural kyphosis. Scheurmann’s disease causes misshaped vertebrae where ligaments surrounding the vertebrae can be thicker than normal and aggravate the condition.

Kyphosis occurs in childhood due to slouching, leaning back on chairs and carrying heavy school bags. Owing to these routine activities in childhood, ligaments and muscles that support the vertebrae are stretched. Consequently the thoracic vertebrae are pulled out of position resulting in kyphosis.

Spina bifida, a birth defect where spinal column of the fetus does not close completely during development in womb, also causes abnormal curves. Congenital kyphosis is caused when normal growth of spine is disrupted before birth where there are chances of vertebrae fusing together.

Arthritis, osteoporosis, spine infections and spine tumours also cause kyphosis. In some cases, congentital kyphosis runs in the families thus attributing the defect to genetic issues.

Kyphosis also occurs due to bone weakness, wear and tear occurring especially in old age, Paget’s disease where development of new bone cells is disrupted. It also occurs due to genetic disorders such as neurofibromatosis and muscular dystrophy which refers to progressive weakening of muscles. Diseases like tuberculosis and cancer may also lead to kyphosis.

Though the cause of scoliosis is not evident, it occurs due to disease, injury, infection, birth defect and is observed to run in families.

Scoliosis is abnormal curve towards left or right side and affects thoracic spine in children and is also found in adults. This sideways curve may be S shaped or C shaped.

Scoliosis shows indications in childhood or teenage and the curve may be small, moderate or large. When this curve, which is described by doctors with alphabets C or S, is larger than 10 degrees on X ray sheet, it is termed as Scoliosis.

Visible symptoms are uneven shoulders, waists and hips, and one shoulder blade bigger than other, ribs sticking far on one side than other. Non visible symptoms include low back pain, back stiffness, pain and numbness in legs and fatigue that result from muscle strain.

The cause of idiopathic scoliosis is not as yet deciphered while congenital scoliosis occurs due to incomplete or failure to divide properly while in womb. Neuro muscular scoliosis is caused due to spinal bifida, cerebral palsy and spinal cord injury. Degenerative scoliosis occurs when discs and joints begin to wear out, and this is found in adults as they age.

Only when intense, lordosis is considered for back pain treatment in Chennai. Medication, physical therapy to strengthen muscles and range of motion, weight loss, braces, vitamin D enriched diet are methods with which lordosis is treated.

Lordosis is also prevented by exercises such as shoulder shrugs, neck side tilts, cat and bridge yoga poses, leg raises, pelvic tilt on a stability ball.

In case of congenital kyphosis, surgery is conducted during infancy to avert severity of condition as the child grows.

Though there are cases where treatment is not required post 70 degrees curvature, possibility of interventions are discussed when the curve goes past 60 degrees.

In cases of kyphosis which is accompanied by intense pain and limited mobility, spinal fusion is advocated. Such surgery fuses vertebrae to single bone where small pieces of bones are brought together with metal plates, rods and screws which enable rest of the spine to move normally.

Scoliosis is treated through three ways namely observation, bracing and surgery. Based on severity and patient’s physical maturity, one of the above mentioned methods are conducted as treatment measures. Treatment also depends on the magnitude and location of the curve and developmental stage of maturity of the bones.

Diagnosis about the type of curve and its cause are very important parameters to be studied before deciding on treatment. Management interventions are customized according to patient’s complaints and kind of deformation that they are suffering from, which is mostly unique in nature.

The spine surgeon in Chennai is also prime surgeon in minimally invasive surgery and has various prestigious accolades to his credit.