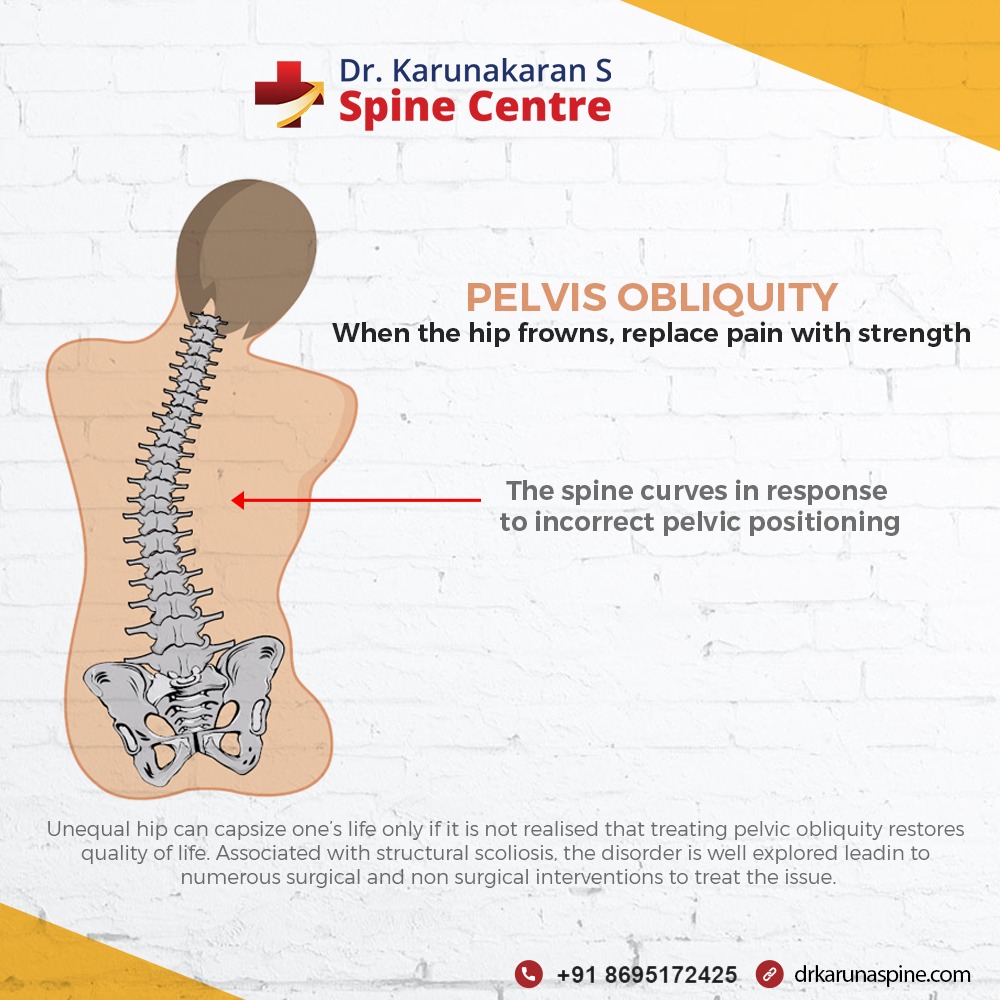 When pelvis, a basin shaped structure that supports spinal column and abdominal organs, is misaligned, one hip becomes higher than the other. Treating pelvic obliquity is important faliling which it leads to spine compression and abnormal postures. Pelvic obliquity is associated with structural scoliosis and is caused by either leg length equality or contractures in the hip or by both these conditions.

The pelvic tilt types are diagnosed by physical and radiological evaluations and pelvic obliquity treatment is usually focused on one of the issues such as balancing legs, releasing the hip contracture or scoliosis correction.

Treating pelvic obliquity is based on symptoms including back pain, headache, leg pain, asymmetrical gait, difficult walking and uneven leg length which involves pelvis and spine. Pain increases in the hips and buttocks, during or after walking. While standing for longer hours, pelvic obliquity pain becomes higher in the hips and lower back. While lying down, the patient experiences pain in the lower back.

Patient is asked to lie in supine position with legs apart and internal and external rotation is carefully studied. Flexing at the knees makes measurements easier and other motion tests like extension, abduction, adduction are also conducted.

Palpation or feeling with fingers or hands is also a part of the examination with which musculature, tendinous origins, bony prominences and articulations, bursae and apophyses are studied. Neurological examinations are part of pelvic obliquity test even if the involvement of nerves is not suspected. Muscle groupings are part of the testing procedure.

Pelvic tilt types may be lateral or anterior. Stand in front of the mirror with feet shoulder width apart. Place heel of the hands in front of the hip bones and hold a string stretched between both hands. If the line between the hands is tilted and not parallel to the ground, it indicates presence of lateral pelvic tilt.

Muscles in front of the pelvis and thighs become tight, while those muscles in the back become weak. Patients suffering from anterior pelvic tilt experience pelvic obliquity pain in low back, hip and knee apart from  incorrect posture and forced hip and knee rotations.

Sit on the edge of a table and lie on your back with legs hanging off the table at the knee. Pull one of the legs towards you, hold under the knee and bend legs till it reaches the chest. Repeat with other leg. If the back of the resting leg does not touch the table during the above-mentioned posture, it confirms the presence of a tilted pelvis.

A combination of surgical procedures such as lumbodorsal fasciotomy, abductor fasciotomy and triple innominate osteotomy with or without transiliac lengthening have proven to improve obliquity in patients. However Total Hip Arthroplasty (THA) is most popular surgical intervention for pelvic obliquity.

Children with cerebral palsy are susceptible to pelvic obliquity which may be categorized as supra-pelvic which comprises spine and trunk disorder and infra-pelvic which involves hip joint and lower limb. This condition occurs due to larger thoracolumbar curves.

Pelvic obliquity in cerebral palsy patients changes muscle force vector on the hip joint which results in hip dislocation, which in turn is caused due to abnormal forces of the femoral head (highest part of the thigh bone) on the acetabulum or socket of the hip bone.

Pelvis gets wider as pregnancy progresses and anterior width is not recovered even after one month of child birth. Pelvic asymmetry is found throughout pregnancy. Exercises such as pelvic tilt and leg lifts strengthens stomach, back and buttocks and enables good posture. Exercise such as glute bridge, quadruped pelvic tilts, birth squat, foam rolling, happy baby stretch are recommended before, during and after pregnancy.

Despite resembling scoliosis or occurring during sensitive occasions like pregnancy, pelvic obliquity is no more a catastrophe thanks to the enhanced comprehension of its nature and treatment.  Early visit to the best spine hospital in Chennai is effectual in treating the disorder. Dr Karunakaran, one of the best spine specialists in India, who is a prime surgeon in minimally invasive surgery and holds an expertise which is more than two decades old, provides the apt treatment for a spectrum of spinal issues.